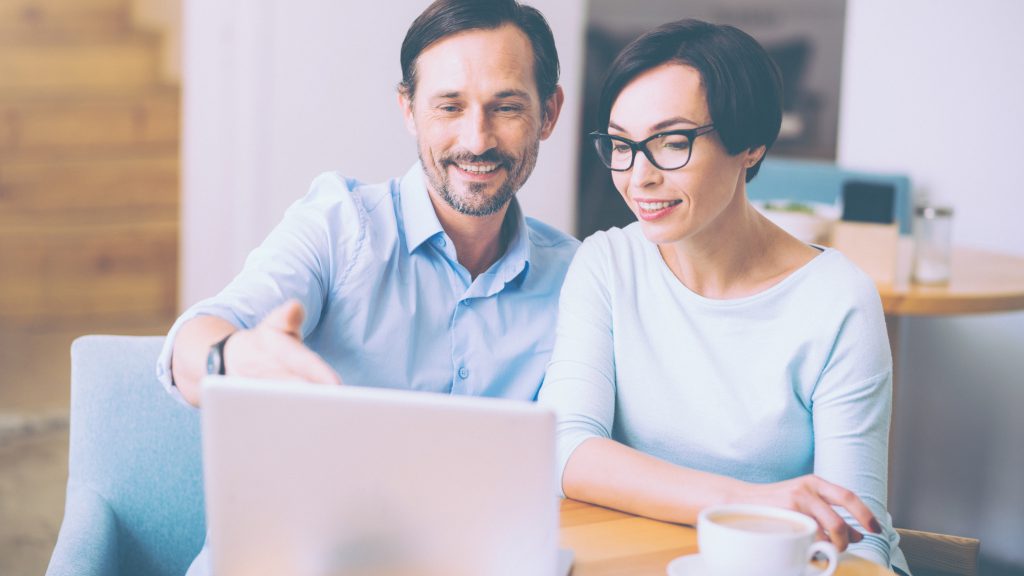 On April 12 the Dow closed above 11,000. Many American investors wanted to break out their party hats and sing “Happy Days Are Here Again.” And who wouldn’t be happy with the Dow’s rise from below 7,000 points during the last two years? For many, a powerful new mood of optimism and even daring has emerged.

I like optimism as much as the next person, particularly when it is well founded. But I also try not to forget one of the cardinal rules of investing: It’s when things look darkest that savvy investors think about buying. It’s when everyone shouts “Buy!” that we should be cautious.

In our age of “new normals,” it’s no surprise that leading economists and investment advisors disagree (sometimes vehemently) about our current condition. But in trying to describe today’s investment scenario, I want to focus on something that happened a few days before the Dow hit 11,000.

On April 8 the new Major League Baseball season officially opened. As a lifelong fan, I’m glad to welcome back America’s favorite pastime, with its calming rhythms that recall simpler times.The season has also reminded me that each game has nine innings.

How many times have fans seen the home team build up a big lead in the early innings only to squander it before the game is done? And how many of us have had our hearts broken by a loss in the bottom of the ninth? As the famous Yogi Berra said, “It’s not over till it’s over.” And that’s true for baseball as well as the Great Recession.

Baseball presents investors an important question we need to answer: What inning are we in?

Although the recent signals of economic recovery have been strong and encouraging, there are plenty of warning signs that illustrate the lingering weaknesses of today’s domestic and global economies. That’s why I think it would be prudent for investors to stop, take a deep breath and carefully focus on the next pitch.

Those who want to swing wildly every time in an effort to hit a home run risk striking out. But cautious investors who focus on getting to first base may see their runs adding up inning after inning.

In this issue of Perspectives, I would like to explain some of the factors we are watching as we develop our strategy for the April-June quarter.

Equity Markets. Much has changed in the past year. It was only a year ago that equity markets posted record high levels of volatility. But as this commentary was going to press, the U.S. stock indices had a string of consecutive rises to rival any of recent memory.

“Recent signals of economic recovery have been strong and encouraging, but plentiful warning signs illustrate the lingering weaknesses of today’s domestic and global economies.”

The number of days without so much as a 1% decline surpassed any rally in the past 20 years.

Former Fed Chairman Alan Greenspan recently said that the current recovery is being shaped by the rise in the equity markets, not the other way around, which has typically been the case. The current rally has done much to brighten the mood of investors, and as we have discussed in previous commentaries, investor mood and psychology play a very important role in investment market performance.

But are the market’s prices realistic? With trillions of government stimulus dollars having been pumped into the system and no sign yet of inflation, the swirling equity market vortex has pulled prices ever higher. With few sellers willing to bet against the current rally, and yields on cash, CD’s and money market mutual funds near zero, stock prices may continue to rise.

While investors focus on the equity markets, fixed income markets are now a potentially risky bet, largely because a sustained recovery could cause intense inflationary pressure. In fact, with the expanding debt burden, interest rates are likely to rise (even without inflationary pressure) due to investors demanding more income to offset deficit risks. An April 10 New York Times article illustrates this problem:

“Even as prospects for the American economy brighten, consumers are about to face a new financial burden: a sustained period of rising interest rates.”

That, economists say, is the inevitable outcome of the nation’s ballooning debt and the renewed prospect of inflation as the economy recovers from the depths of the recent recession.

The shift is sure to come as a shock to consumers whose spending habits were shaped by a historic 30-year decline in the cost of borrowing.

There are several factors that can cause longer-term interest rates to rise, such as inflation expectations and Federal Reserve rate hikes. However, the recent rise in interest rates is more likely due to the exploding supply of U.S. debt. Let’s look more closely at the global debt picture.

A world awash in debt

The magnitude of the debt loads taken on by the world’s sovereign nations over the last few years can only be compared to debt levels during and after World War II. Further debt issuance would only raise risk levels and interest rates.

US public debt – that is, all federal debt held by individuals, corporations, state and local governments, and foreign investors – has skyrocketed to $7.5 trillion in 2009, which equals 57% of GDP. Forecasts have that jumping to 64% of GDP in 2010 – and rising to 67% of GDP by 2019 according to the Congressional Budget Office’s forecasting. (See Chart 1.) The last time U.S. debt reached these levels was during the fighting of World War II (1941-1945) and after the war as the nation funded the Marshall Plan to rebuild Europe. 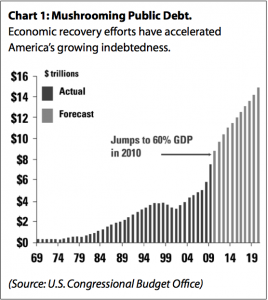 U.S. indebtedness now compares to that of European nations like Germany and France.

How does our national debt compare to the rest of the world? As a percentage of GDP, the U.S. debt now compares to developed European economies such as France and Germany. (See Chart 2.) The United States enjoys “reserve currency” status, which helps to finance a larger debt load but never before has a reserve country carried such a large deficit.

Governments and the Quest for “Stability.”

Governments may be tempted to prolong economic intervention, applying “permanent” solutions to temporary market problems in order to eliminate instability. But instability is necessary in healthy investment markets. The longer a market is forced to remain “stable,” the greater the risk of unintended sudden change. In addition, political cycles are different than economic cycles, so the timing of government solutions can create large imbalances that interfere with natural market cycles. In a robust economy, cycles are real and stability is illusory.

We also need to consider pensions because the vast majority of Americans are counting on private or government-financed pension plans for at least part of their retirement nest egg.

The last decade has been brutal for most pension plans. In 1999, 22% of all pension plans were underfunded. By the end of 2009, 93% of all plans were underfunded. There are two ways these plans can regain their lost stability. Either plan sponsors, such as corporations or governments, need to inject money into these accounts (which seems unlikely) or investment values need to rise dramatically to compensate for the losses of the past decade.

Of course, there’s a third choice that many people would rather not consider. Pension plan sponsors could reduce or eliminate their employee and retiree benefit programs.

“While many of us would like to rapidly put the recent bad times behind us and rush into a better future, real recovery is a long-term endeavor that could take five or ten years.”

In the past two years, American markets have posted two of the largest moves in history: downward in 2008 and upward in 2009.There are ongoing risks of large moves in either direction, so we must cautiously seek out the most promising opportunities where we can.

Riding Out the Early Innings

In addition to economic indicators, there’s something else I will be closely watching this spring: my daughter’s softball games. She’s a good pitcher with a solid arm (I acknowledge a personal bias). I look forward to watching her over the next five to ten years as she develops as a player.

And that’s a good time frame for all of us to consider as we look at our ever-evolving investment scene. While many of us would like to rapidly put the recent bad times behind us and rush into a better future, recovery is a long-term endeavor that could require five or even ten years. We may like things to turn around more quickly, impatience or rash investment behavior won’t change reality.

In short, I believe the recovery game is still in its early innings. So for now I’ll be focusing on helping my clients get runners on base and bring them safely home rather than encouraging them to swing for the bleachers with every pitch.