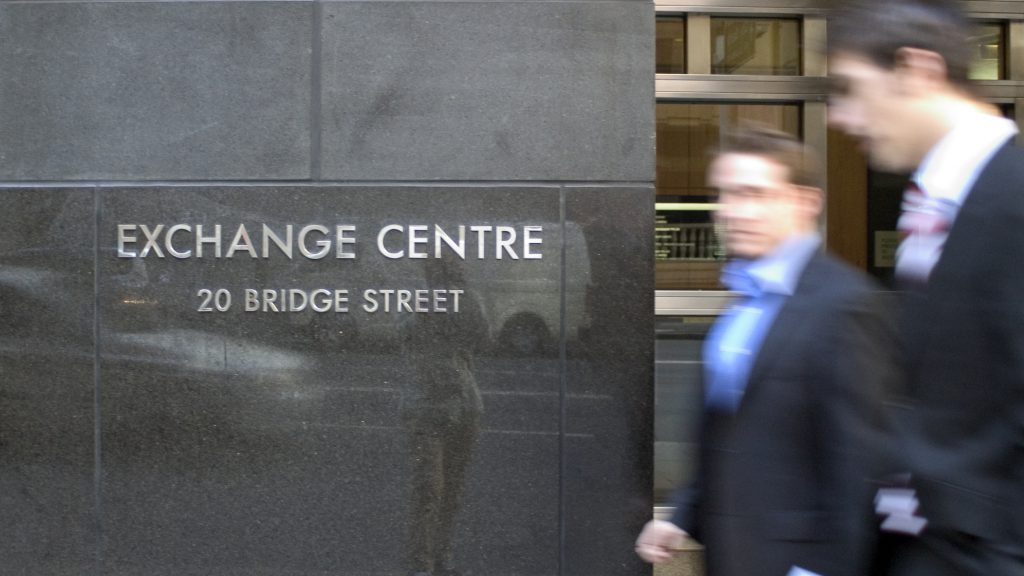 While each New Year seems to begin with a measure of investor concern, there is no question that 2017 represents something of a new high-water mark in this regard. Certainly, the political changes that have swept through Washington have generated a host of uncertainties. As both the US stock market and consumer expectations keep climbing higher, should we be hopeful, fearful or just, as we prefer, open-eyed?

Radical uncertainty is a phrase coined by Mervyn King, former head of the Bank of England, to describe the increasingly unstable global politics in the aftermath of the financial crisis. In the wake of Brexit and the US election, Americans and Europeans alike are experiencing the aptly-termed radical uncertainty with deep apprehensions over what Donald Rumsfeld once described as the “unknown unknowns.”

Some years ago, Jason Zweig, the Wall Street Journal columnist and revered investment commentator, remarked “I’ve been saying essentially the same thing over and over again for 25 years. The challenge is in finding new and interesting ways to say it.”

What investors fear most is a rerun of a catastrophic market decline such as last occurred in 2008. The S&Ps 37% decline that year left its impression to be sure. Behavioral science – a field dismissed as nonsense by the economics profession as recently as the 1990s – has repeatedly demonstrated that we react far more strongly to negative experiences than to positive ones. A loss of 30% in one’s portfolio is felt on average twice as strongly as is a gain of 30%. Compare your own emotional memory of 2008’s market loss to 1995, a year that saw a stock market gain of 37%. Yes, 2008 was more recent, but a large measure of 2008’s comparable vividness is due to the much higher emotional weight we all give to loss aversion.

Losses of this magnitude are exceedingly rare and in fact have only occurred six times in the last two hundred years of US equity market returns. However even knowing that does not prevent a persistent and irrational fear of market catastrophe. We similarly fear all sorts of events that have an infinitesimal risk of causing harm, from shark attacks to airplane crashes and even terrorist events. These are the “news” that makes it onto the front pages and commands our disproportionate attention.

That is not to claim that major market declines, sometimes multi-year declines, do not occur and bring with them gut-wrenching portfolio losses. But the key words here are “gut-wrenching” and not “portfolio losses.” We have always stressed that those clients who are growing their assets for the longer-term adopt an allocation that is not so risky that they are unable to resist the very real urge to bail out when a major market sell-off occurs. For those who were 30, 40 or even 50 in 2008, and who resisted the very real urge to sell their risk assets, their portfolios are at higher valuations today than they were prior to the Financial Crisis.

However, if you are nearing, or in retirement, large declines can indeed be disastrous. For these investors, it is prudent to limit portfolio volatility employing a much more stringent risk-managed approach. Preservation of cash flows to support distributions becomes a critical goal.

Markets can, and do decline. A 20% decline occurs every 4-5 years and is a routine part of the investment experience. If you are in your accumulation years, we want to make sure you are taking no more risk than would make you lose sleep or even panic in this type of market event. Your investment assets will not need to be tapped for 5, 10, 20 years or more. If you are in your retirement, distribution, phase, we want to make sure your needed cash distributions will be there for you. You have worked a lifetime to accumulate your savings and our job is to make sure they are there when you need them.

Where We Go From Here

The US stock market generated solid returns in 2016, beating out nearly every other asset class worldwide. Outside of US corporations, 2016 held very little for investors. A rebound in corporate earnings, accelerating US economic growth, and stabilizing oil prices helped stoke investor enthusiasm for US stocks. After Donald Trump’s election victory on Nov. 8, investors bet heavily that tax cuts, deregulation and fiscal spending would kick-start growth and inflation that have been tepid since the financial crisis. They dumped government bonds, which tend to lose value as inflation erodes their fixed payments, sending yields higher. They piled into financial stocks on expectations that higher rates would boost lenders’ profits. They pushed the dollar up to a 14-year high.

For bond investors, the year was all about timing. Buy and hold investors could have slept through 2016 and would hardly have noticed the difference. The yield on the benchmark 10-year Treasury note closed at 2.44% on 2016’s last trading session, up from 2.27% at the end of 2015, generating the second consecutive year of price declines for the $14 trillion US Treasury market. But during the year, bond bulls had their moment in the sun. Yields, which fall as prices rise, tumbled nearly a full percentage point by the summer, with the 10-year hitting a record low of 1.36% in early July during the post- Brexit flight to safety. These low yields would not prove long lasting. The fourth quarter of 2016 witnessed the biggest quarterly selloff in Treasuries in more than two decades. The 10-year Treasury yield climbed 0.84 percentage point between October and December, the largest quarterly gain since 1994.

The near-term direction for interest rates is an important determinant for where the market is headed. Some analysts believe that the extended cycle of lower yields has come to an end and that the record-low 1.36% yield mark set in July 2016 marks the bottom of the 10-year Treasury yield. Others are hesitant; given that the bond market has repeatedly proven wrong those who have called for the end of the bond bull market in recent years. They caution that investors betting on higher yields have pinned too much hope on Mr. Trump’s fiscal stimulus and its boost to the economy. If Mr. Trump’s policy outcome fails to deliver, growth optimism may wane, and investors may turn back to bonds, pushing yields right back down.

Higher interest rates in the US, along with brighter domestic economic prospects, caused the US Dollar to rise sharply versus other currencies late in the year. The US Dollar Index, which measures the US Dollar against a basket of 16 other currencies, was up around 3% in 2016. This is cause for concern, as a strengthening US Dollar could threaten the tepid recovery in US corporate earnings by making US exports more expensive to foreign buyers and reducing the value of companies’ overseas revenues. This is the scenario that played out in late-2015 into early 2016, when a surging US Dollar caused a sharp selloff in stocks. Perhaps that 10% decline in US stocks through the first 28 trading days of 2016 is a distant memory for some, but based on this recent history, the US Dollar movements should remain on investor’s radar.

High stock market valuations are a cause for contemplation. As of year-end, the S&P 500 traded at an average of roughly 21 times trailing 12 month earnings, above the 10-year average of 16 times trailing 12 month earnings. The cyclically adjusted price to earnings ratio – also known as CAPE – is similarly showing that stock valuations are extended. However, investors should not avoid stocks simply due to high valuations. Since 1990, the S&P 500 has traded above the average CAPE ratio in 307 of 324 months, 95 percent of the time. Anyone who abandoned US equities when the CAPE ratio was overvalued, would have missed gains of more than a 1,000 percent over that time. History shows, time and again, that broad market valuation is a terrible stock market timing mechanism. High stock market valuation, like we have right now, does mean that we should lower our expectations for future returns. In other words, if the 100-year average S&P 500 return with dividends reinvested is about 10%, then it would be reasonable to expect returns over the next 5-10 year to be less than 10%.

Perhaps the key economic variable that bears watching this year is inflation. Over 8 years ago, the Federal Reserve embarked upon its unprecedented monetary intervention – zero-bound interest rates and 3 rounds of quantitative easing – in an effort to spur the economy and stave off the deflationary effects of the Great Recession. While the US economy has experienced robust job growth over the past several years, inflation figures have remained below average. However, recent indicators suggest that we might be seeing some inflation returning to the economy. As the graph here illustrates, inflation has recently risen back above 2% and is trending higher.

The recent rise in inflation began before Trump’s surprising election victory, and the new administration is promising to engage in policies that would create further inflationary pressures. Trump has pledged to spend a trillion dollars on US infrastructure, cut US corporate taxes from 35% to 15%, and to cut personal income taxes on high wage earners; all three pledges are aimed at sparking faster economic growth, and rapid growth creates inflation. Moreover, if his trade protectionist rhetoric results in any actual tariffs or trade disputes, this will further fuel inflationary pressures. 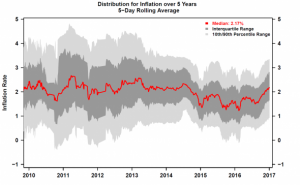 There are, however, countervailing forces that should prevent inflation from becoming a runaway problem. The US national debt, currently at $19.8 trillion, is already extremely high. Additional spending measures, or tax cuts without offsets, will have less of an impact on economic growth. And market factors like higher interest rates and a stronger dollar will have a damping effect on inflation. So while inflation is rising, it is not greatly concerning at this me.

Perhaps the overriding theme heading into 2017 is that uncertain times aren’t enough to cause investments to decline. The stock market is extended and overvalued, but there is – at present – no catalyst or reason to cause a change in direction. Interest rates and the US Dollar are up sharply, but those moved very quickly to price in the effects of a new administration. Inflationary pressures are picking up, but don’t appear out of control and a little inflation is a good thing. What does this mean for our investments? Stay the course. Diversification is our best weapon against uncertainty. Discipline serves to keep a steady hand despite anxieties.