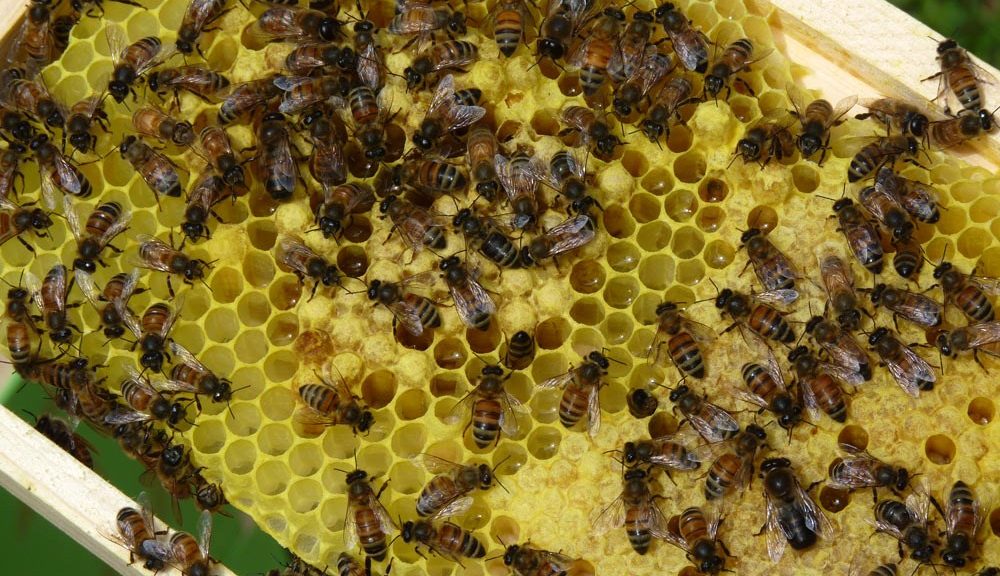 A bee colony is an amazing, efficient, organized social network. In the spring and early summer when honey gathering takes place, the colony and the hive grow to its largest size. Later in autumn and winter, it contracts in size. Bees will seek to grow their colony every single day right up until the sun reaches its highest point in the sky, and then the day after the summer solstice, when the sun is just slightly lower, the bees transform their energy from seeking growth to stockpiling and storing. They begin to winterize, and they do it in late June! Right when we humans are breaking out the grill and buying sandals and sunscreen, bees begin prepping for winter. Even though plenty of sun and warmth remain after the 3rd week of June, these social animals heed an environmental signal and start making arrangements for preservation.

Bees do not seek to make the last bits of extra growth beyond the solstice. They begin to prepare for the next phase of the cycle. They protect what has been built, and although the colony will shrink during the cold, hard winter, they make preparations to survive it. And then, in the depths of winter, when the sun is lowest in the sky and the days are short, what do bees do? They prepare for growth.

A bee’s life is divided into two halves. One half is characterized by expansion and the other by contraction. The two solstices create the top and bottom of their life [investment] cycle. They pivot together, work together, act like a healthy, functional collective. The colony always above the individual. And by doing so, they thrive in growth [markets] seasons and survive in weak [markets] seasons.

We can learn a lot about successful investing by observing and then mimicking the actions of bees. We inherently understand that investments have economic cycles. If we could simply use the solstices to plot our economic market tops and market bottoms, then capital allocation becomes much easier. But alas, we are humans. And humans are not bees. We have egos and seek to be unique and special and above average. We grade on a relative basis. We have biases and inequality and emotions. Environmental signals can be hard to hear.

It may seem odd to discuss economic recessions in the autumn of 2018. After all, the US economy is churning out growth and unemployment is the lowest in 50 years! Capital and credit are easily accessible and abundant. Nectar [credit] sources abound! We are foraging and growing and building.

The same is true for bees. Even after the summer solstice in late June, there are abundant foraging and nectar collection opportunities. Flowers and plants do not die away overnight. They continue to flourish throughout the summer months. But now the bees understand that nectar [credit] has peaked and will begin to slowly diminish. This will ultimately result in fewer resources and may even bring on robbery and raiding by yellow jackets.

By August, the drones, which are so instrumental in the growth cycle, are now being driven out to reduce colony numbers. (Perhaps similar to a central bank raising interest rates to reduce credit flows). With less nectar [credit] and more time spent defending stores [paying debt loads], the bees become defensive.

For us human investors, there is no “emergency warning system” blasted to our phones to tell us when to reduce risk. There is no “all clear” that tells us to seek growth. We must find our own signals. And so I get to the question: What if some of the biggest and most influential “insiders” have sensed the passing of the summer solstice? What if the “smart” money has already begun their winter preparation?

Think back ten years to the economic summer solstice of 2007 and the subsequent financial crisis of 2008-09. Our cycles are different from bees. We do not split the calendar evenly between “expansion” and “contraction.” Fortunately for us, our expansion phases last approximately 4x longer than our contraction phases. Unfortunately, our contractions can be severe and gut-wrenching.

In the depths of the last crisis, The Federal Reserve and Congress and billionaire magnates took actions to create credit, reduce interest rates to zero percent, create incentives to borrow and buy assets, and indeed bought enormous sums of assets themselves. Smaller individual investors who heeded the “insiders” actions and followed suit into the expansionary phase earned themselves a significant profit these past ten years.

When we begin to discuss trillions of dollars, it is often easy to skip over the significance of the size and difficult to put into context.

In brief, here is some context:

If we were playing a game of musical chairs and there were 215 players and only 90 chairs, I would expect that everyone would be straining to hear when the music stops.

In recent months, another group of “insiders” began to winterize. Corporate executives have started selling stock at a rate of $400 million per week. There are plenty of valid reasons for insider selling, but it is also valuable to watch for a growing trend toward larger amounts of selling in aggregate.

Access to credit is still relatively easy; interest rates are still below average levels and corporations are using enormous sums of cash to buy their own stock (a record $1 trillion is projected for 2018). Indeed, there may still be days of sunshine and summer activities as credit flows, and capital chases scarce assets. But perhaps some of the most “influential” and “richest” bees in the human colony are heeding an environmental signal of the economic summer solstice.

Each of us are now eleven years older than the last summer solstice, which occurred several quarters before the Global Financial Crisis hit with full force. And each of us has our own story, and our own financial needs and goals, so it is difficult in a commentary such as this to provide specific advice. But here is the message.

It is time to prepare. It is not yet time to hibernate, but it is time to have a plan that is actionable, specific to your life, and known. It is impossible to call a market top, but we can control our own financial destiny. We can begin to change our activities from seeking growth to seeking preservation and income. These are not abrupt changes or large swings, but rather a process of making ready for the next cycle.

We cannot control the actions of the crowd, but we can fully control our exposure. We can make sure that when the music stops, we have one of the chairs.

We humans, and most pertinent to this commentary, we investors are part of a social framework. A collective. A market. Like bees, we are part of a larger organism. Imagine if the collective organism were to switch from seeking growth to seeking preservation and we, the individual bee decided we wanted just a bit more growth, a bit longer in the sun.

Sometimes, the best path to prosperity is to store up reserves and be prepared to invest in the next cycle rather than trying to suck the last bits of nectar out of the current cycle.